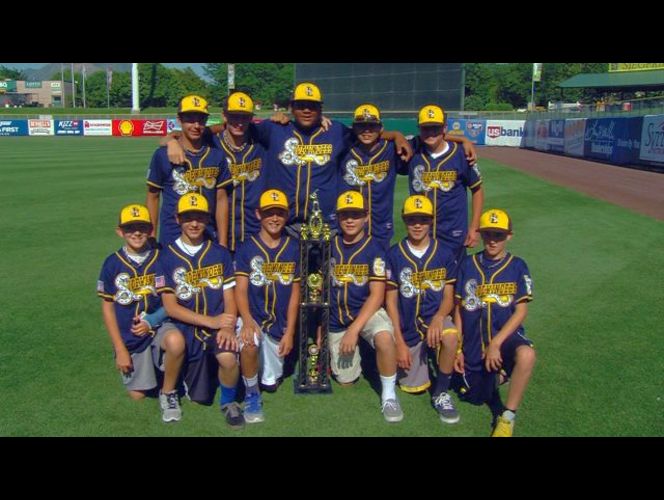 The Salt Lake Sidewinders’ under 12 team accomplished something recently that no little league team in Utah history had done before.

The Sidewinders became the first Utah team to win a championship at the Cooperstown Dreams Park in Cooperstown, New York, home of the Baseball Hall of Fame.

“The feeling at the end was unbelievable,” said coach Rob Jeppsen. “You could feel all those years coming together and I’m so proud of those guys right there because they had to do so much, all those practices. You feel this culmination of all those things and I look back and I see those boys holding that trophy over their head. I can’t even explain how cool it felt.”

The Sidewinders defeated the Tallahassee, Fla. Heat 3-2 on a three-run walk off home run by Ethan Fowlks.

Their accomplishment is newsworthy, but when you get to know more about Ethan, the story becomes extraordinary.

When Ethan was 2-years-old his parents noticed he hadn’t started talking. Concerned, they took him to specialists to be evaluated and discovered that their son had autism.

“Your first thought is obviously about life and what he might deal with throughout his lifetime,” said his father Guy Fowlks. “That lasts a very short period of time and then you realize what capabilities he does have.”

One thing Ethan does really well is play baseball. Guy, a former baseball player at the University of Utah, discovered early on that Ethan had a knack for the game. Playing baseball and being a part of a team like the Salt Lake Sidewinders has been helpful for Ethan as he and his family cope with the challenges of autism.

“Some Autistic kids can’t control their emotions,” Ethan said. “There are kids like me that can’t help, but to just go on the ground pretending that they can’t do it but they can do anything.”

He is proving that to be true and changing the way people who know him think of autism. It hasn’t kept him from achieving his goals by being part of a very talented baseball team.

That was the case July 11 in Cooperstown, New York.

His team trailed 2-0 in the final inning against Tallahassee and were down to their final two outs. There were runners on first and second when Ethan came up to bat.

“I knew that when he stepped to the plate he had a shot,” Guy Fowlks said.

Ethan was just as confident as his father. He crushed a pitch over the right field wall. With one swing he helped his team make history and claim Utah’s first championship in Cooperstown, and he did it with a walk-off home run.

“When I touched the plate when I was coming home my teammates just charged at me and did a dog pile,” Ethan recalled about his special moment.

It was an emotional moment for Ethan and his teammates, but especially for his family.

“This is an absolute dream come true,” his father said. “The celebration at home when we won the championship game there was not a dry eye, at least in my family, as we celebrated together.”

Ethan and those who witnessed his home run that late summer night will never forget it.

“Probably one of the most wonderful experiences of my life,” he said. “Having to make history to make Utah proud.”

It was late on a particular weeknight. I was at the computer blogging and Casey walked in the back patio door from the fire pit with eyes a bit puffed up. He said to me, “I have your next hope story”. As I sat reading and then watching the story unfold, the tears came. He didn’t have just my next hope story, but one of the most emotional ones as well. I can remember back in December walking on a treadmill reading a book about a mom and her daughter’s journey with autism. She quoted in the book, “…sweet signs of hope.” The genesis of Friday’s Sweet Signs of Hope came from these four simple yet significant words. These hope stories provide us with a message of enduring and long lasting hope. I struggle at times thinking others might gain a false sense of what this hope means. It is not a hope that someday autism will become less prevalent, or a hope that one day we will find a cure (there isn’t one, there never will be), but it is a deeper hope. A belief that each child whether autistic, neurotypical, or any other with a special need is beautiful. A hope in the good and a hope in the moments that make these kids smile. Moments that make them say…

“Probably one of the most wonderful experiences of my life…Having to make history to make Utah proud.” ~Ethan

Did you find this story inspiring? Maybe you have encouraging words for the author. Leave your thoughts and comments below!